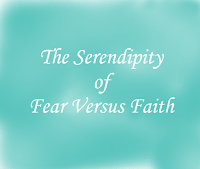 Have you ever given notion to the idea that a word could be beautiful? For me, that word is Serendipitous. The word has an air of grace and elegance as it flows off the tongue, but it is not only the word. The simple definition of the word—serendipitous means: to find something good or beautiful when you are not looking for it.

As parents, I think we are so busy with life that sometimes we tend to have our controls set on autopilot without any realization...until something forces us to stop and take inventory of our world around us. I know I have personally experienced this autopilot phenomenon more times than I would like to admit.

My mind has been consumed with a lot of fears this past year. Worrying about Brady, his mental health, and sobriety, in addition to the normal things you consider when your child is grown and living on their own for the first time. Jayde's health has not been good. Her POTS continues to spin out of control, and I worry about her future. Instead of obtaining her learners permit on her sixteenth birthday, her handicap placard came in the mail. We have begun looking at colleges, though most days, I wonder will she even be able to attend college.

Pondering these experiences forced me to realize I had not exactly been living anything that closely resembled a serendipitous life. Then the simplest of things happen, prompting me to realize I can choose fear or choose faith.

Net neutrality has been a hot topic in our house over the last few weeks. The idea of her internet being censored or controlled by some foreign outside party filled Jayde with a profound sense of indignation. I often remind myself she has never known a world without cell phones or the internet. This school year has been rough. Because of her POTS, Jayde has missed more school than she has attended. About a month ago, she began half-day cyberschool; that was a difficult but necessary pill to swallow. Last Tuesday she spent more time than normal in her room. Each time I checked on her, I could see the intent in her eyes as she typed away on her keyboard. When she emerged in the afternoon, she began with, "You know the net neutrality vote on Thursday?" I responded with, "Yes, we signed the petitions against this craziness." Her response, "Well, look at this." She was excited to show us the letters she had written to senators, congressmen, and anyone who would listen. The letters were about net neutrality, its importance to her, her life, and our society. I could not help but beam with pride. Though we best lead by example so often, we think our children are not listening to our words of wisdom. At that moment, I realized she had been listening and watching me, and I saw myself in my daughter's eyes, her passion and her determination.

My children have always been my greatest sources of inspiration and encouragement, even when they had no idea they were. For well over a year, the two of them, along with a few special people, have encouraged me to share more of my writings or start a blog. There was a piece of me silently wondering, "Are they just being kind?" You know, like the people who tell their friend they should try out for American Idol. All the while, you sit in your living room wondering, what the heck were they thinking? As you agonize over their pitch or lack of it. So, of course, the little voices of doubt made themselves at home and began wandering through my mind...and sometimes they even passed over my lips. What if no one wants to read what I have written, what if I am not good enough, what if my sometimes-outspoken attitude is offending...what if…what if…what if. Then I thought, what if? What if someone does read and enjoy what I have to say or what if my ramblings meet the right person's eyes and heart? But the biggest what if was...what if my inner doubts cause my children to be filled with their own multitude of what-ifs. That was one what if I was not willing to gamble on. Jayde had not written numerous letters because she heard me saying I should write my senator, president, or anyone else...she wrote her letters because she saw me write my letters.

Some of the greatest adventures I have experienced were because I threw the what-ifs to the wind, tightly squeezed my eyes shut, and leaped into the unknown. Instead of fear...I had faith that no matter where I landed...everything would be all right. Most of the time, I was not looking or expecting something great...yet somehow, it found me. Why? Because fear was no longer a roadblock. I am not saying fear does not have its place...it should keep you from placing your hand on the hot stove...but it should not keep you from crossing a proverbial road, simply because you fear not knowing what is on the other side. Fear and faith are much like light and darkness. One cannot exist while the other is present. Though sometimes, experiencing one can make you appreciate the other even more.

So, with my first blog post, I dedicate this to my, not so little, babies, as I am serendipitously taking a leap into the unknown...with no idea of where this journey will lead...with the hope that those who follow will enjoy the adventure. If by chance I happen to make you smile, think, cry, laugh or touch something within you...good, bad, or otherwise...feel free to let me know.

Have a serendipitous day!!!